Dashi is the crew's sweet-natured IT officer. She is one of the only females other than Tweak and Tominnow on the Octonauts crew.

Dashi is a Dachshund who controls all of the computers, communication devices, and steering for the Octopod. She is often portrayed as a meteorologist as well, as she often is the one monitoring the weather forecasts on the Octopod's storm tracker. She is also the crew's official photographer, taking pictures of the different creatures the Octonauts meet. Dashi normally stays on the Octopod to coordinate missions on an advisory capacity, but she has joined in on a number of missions before and has even done a solo mission that involved taking photos of various sea life. She has an Australian accent in the original UK version, but not in the US version; instead, she has a lighter voice with an American accent.

Normally, Dashi is seen in her seat up in the HQ next to crewmate and fellow Octonaut Shellington, whom she has done a few missions with before, like staying down in the Mariana trench for a few weeks or looking for different creatures in any ocean they visit. She's also usually seen in her room on the Octopod, which is on the other side of Peso's room, where the décor of it reveals her as being very feminine. The walls are pink and she's normally seen either messing with her favorite camera, sitting at her vanity, or reading. She sleeps with pink headphones listening to soothing music as seen in The Enormous Elephant Seal and The Crab and Urchin, although we hear the music in the "Enormous Elephant Seal" and it's completely silent in the "Crab and Urchin". Dashi has a younger and well-behaved sister named Koshi who is ten and is an amateur detective who helped the Octonauts. She first appeared in Season 1, "The Whale Shark", where she was taking pictures inside a Whale Shark's mouth thinking that it was an underwater cave.

When Captain Barnacles call for an Octo Alert, Dashi is just usually found sitting on her bed doing something or at the controls in HQ. This is also the same for the launch bay. Sometimes Captain Barnacles lets her sound the Octo-Alert, but not very often.

Ryla - (Old friend who taught her about cave diving; seen in the Octonauts and the Caves of Sac Actun) 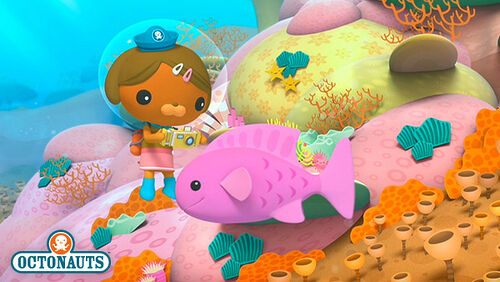 The gallery for Dashi Dog can be found here.

Community content is available under CC-BY-SA unless otherwise noted.