Professor Inkling Octopus is the venerable founder of the Octonauts. He's a creature known as a Dumbo Octopus and he has a deep understanding of marine life. Inkling founded the Octonauts to promote marine research and preservation. Aside from being their founder, Inkling is also their oceanography professor. He rarely ever goes out on missions, but he has gone on a few, such as in The Giant Squid, The Great Christmas Rescue, and The Gulper Eels. Instead, he prefers to help the team from his library in the Octopod. However, Professor Inkling showed his physical prowess when connected to the Octopod to combat The Colossal Squid. He claimed to be an expert at tentacle wrestling.

Unlike the other Octonauts, Professor Inkling (along with the Vegimals) is an amphibious creature and does not need a helmet or air tanks. He is capable of breathing in and out of the water. But, like Captain Barnacles, he also possesses certain attributes pertaining to his species. He admits being able to squirt ink for protection and has little suckers on his arms for him to move and climb.

Inkling is almost always in his 3 chairs: his small chair in H.Q., his large can in the launch bay, and his chair in his library. He will sometimes walk around though, but it isn't seen quite often.

Just like Tweak, The Vegimals, and Shellington who all seem to sleep where they work, it's believed that the same can be said for Inkling. He too appears to live and sleep where he works, which is the Octopod library. He is apparently the oldest Octonaut, judging by the monocle and his collection of old books. He also speaks highly of his family who themselves have written books. His known family members are his Great Uncle (mentioned in The Octonauts and the flying fish) and Squirt (appeared in the Great Christmas Rescue Special).

Professor Inkling is pink with eight arms, head flaps that resemble ears, and a white muzzle. He is normally seen wearing a monocle and a blue bow-tie attached to a white-collar. 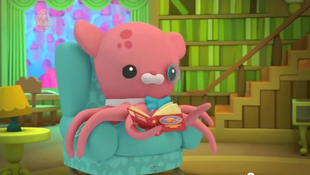 Retrieved from "https://octonauts.fandom.com/wiki/Inkling?oldid=39740"
Community content is available under CC-BY-SA unless otherwise noted.