Shellington is the Octopod's marine biologist who speaks with a Scottish accent. He loves doing field research and working in his lab. He is easily distracted by rare plants and animals and often gets into trouble because of this, but his knowledge is very beneficial in missions. He is very studious about marine life and is passionate for studying the subjects in his lab.

Though he may be knowledgeable about marine life, Shellington is a terrible driver as he has crashed the Gup-D at least three times, and the Gup-E at least once. When out on missions, he's typically sitting in the rear or in the passenger seat. However, he is portrayed as a decent driver in a few episodes, particularly when he mobilizes the Gup-C, contradicting his reckless driving in other episodes. Kwazii has attempted to give him a driving lesson, but it hasn't worked out as seen in "Operation Cooperation."

Some of his talents include playing the harp, playing the piano, golfing, drawing (in the books), sleeping during missions, crashing the Gups, identifying different creatures, and being humorous.

Just like Tweak, Professor Inkling, and the Vegimals, Shellington appears to sleep where he works, so his room doubles as the ship's lab. The shelves are filled with many different samples that he has collected while out on missions. This is where he is usually found, viewing samples through his microscope. When not in his room, he is also found in his seat up in the HQ where he assists Dashi with the ship's computers. He is usually with Dashi during missions.

Shellington has an older sister named Pearl and a little nephew named Periwinkle. He's also allergic to red sea urchins - a delicacy for sea otters, which is one reason why he is a member of the Octonauts.

His fur is brown, with three tufts of spiky fur hanging down over his forehead, and a sand-colored face. He's normally seen wearing a waterproof satchel and wears a pair of blue boots and a blue hat with the Octonauts' logo on it. He's often seen holding his favorite magnifying glass as well. Of all the Octonauts, he is the only one, other than Peso, who has a mouth that doesn't have a peanut-shaped muzzle. His pajama outfit includes green plaid slippers and a striped green nightcap with a fluffy pom-pom on the end.

Shellington is found in the Lab, the Garden, or the Launch Bay for the Octo-Alert. In some episodes, he is seen in the kitchen, with Tunip. In a few others, he is seen either sliding down an Octo-Chute or running through the hallway. 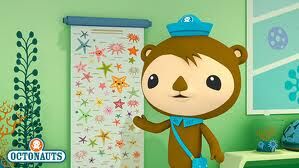 If you want to see more pictures of Shellington, see Shellington Sea Otter/Gallery.