Chef and Gardener of the Vegimals

The Underwater Caves of Sac Actun

Tominnow is one of the Vegimals. She helps Tunip and the other Vegimals. She speaks Vegimalese. She is half tomato and half minnow. Though she isn't one of the main characters, she is often seen. She is one of the smallest Vegimals in the crew and often gets picked up by one of the other Vegimals, mainly Grouber, to reach high objects. She also occasionally has issues moving things that are bigger than her, such as a wheel barrel, as shown in the Ring of Fire. Tominnow's head is coral colored.

She has a high, squeaky voice and is possibly the only known female Vegimal out of the group. She appears to be very ticklish as she is often getting grabbed or tickled by the Octo-grabber on the Gup-A, or tickled by Kwazii on the feet when she was hiding in the Mangrove Forest. 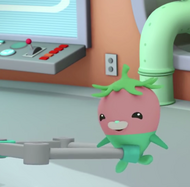 Tominnow is tickled by the grabber