The Vegimals are adorable little creatures that are half vegetable, half animal. They all enjoy cooking, gardening, singing, jumping, and helping the other Octonauts whenever they can. They speak Vegimalese, their own special language. Shellington is usually the only one who can understand what they are saying. All Vegimals have the lower halves of fish and flippers. Of all the Vegimals, however, Tunip is the only major character. They all tend to faint at bad or shocking news, fear, or embarrassment. They are also capable of breathing underwater without helmets. Tweak occasionally may understand their language. In The Bullfrogs, the frogs seem to understand their language as well.

Vegimals have a radish-like head that comes in different colors and a fish-like body that is colored either green or blue. They also have different pieces of leaves on their heads based on the vegetable they are designed after.

How they got discovered

In A Very Vegimal Christmas and the book, Octonauts explore the great big ocean. Shellington explains how he found the Vegimals. He says that one day, whilst out doing some research he found strange eggs on one of the Octopod’s legs. Realising how dangerous it was outside, he brought them to his lab, in order to study them. After a few days, Shellington woke up to what sounded like singing. Afterwards, a small yellow creature popped out, who we now know as Tunip, but he wasn’t alone, as many other creatures popped out. Shellington decided to call them the Vegimals, because of them being 50% Animal and 50% Vegetable

Meomi Books only (No appearances in TV series)

As stated earlier in this article, the Vegimals speak Vegimalese. Information relating to their method of communications have yet to be officially released, however, we have collated some examples of spoken Vegimal and used context to decipher certain sounds and noises that they make. It is also likely that they do not speak an actual language (as in with syntax and grammar), and they use regular expressions in certain situations such as barks or alarm calls like dogs. However, this can be disputed as they seem to have "conversations" with one another. It can also be interpreted as a zooglot or an "animal language" with extremely simple grammar and syntax, similar to how Koko the gorilla speaks. Vegimals, however, as seen in creature reports and other episodes, do have the ability to imitate and speak some spoken English, with their distinct accents, but however much prefer to stick with their native tongue.

Vegimal phonology is fairly simple. A very common sound they produce is a "voiced alveolar trill" or /r/, colloquially known as a "Rolled 'R'" like the Spanish R in "repollo" This commonly follows a Voiceless bilibial stop or /p/ as in the English "Pole"

The following IPA symbols can be heard from the Vegimals:

/ʈ/ : Not in English, pronounced by pronouncing a 't' but curling the tongue back to touch the hard palate.

Here are some Vegimalese phrases!

*Characters such as ü is pronounced as ue (u + e sound).

Pronunciation parts in bold indicate that it must be stressed when spoken.

Characters with diacritics that aren’t the diaresis indicate what tone the vowel is said in. 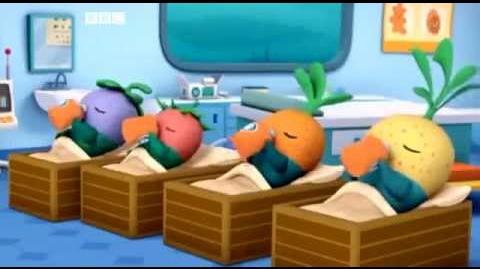 All of the vegimals. 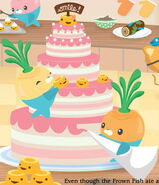 Tunip and Barrot compete in a Ping-Pong match.

Barrot is rolling out some dough for Fish Biscuits. 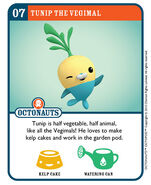 Vegimals in The Enemy Anemones 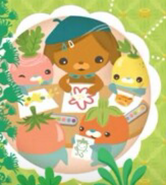